Impact of improved billing on project based businesses

Please note that you can download the PDF of this white paper. 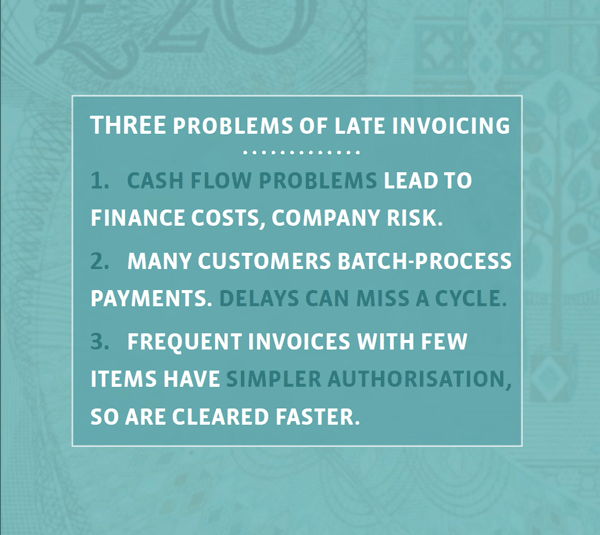 THE PURPOSE OF THIS PAPER is to:

If your system easily introduces errors, you have to invest time for error-checking. This is obviously unproductive time. Worse, time is robbed from a team trying to get on with their work but being interrupted by questions about billing. These interruptions are usually at month-end when invoice delays are particularly costly, deadlines loom and stress levels are high.

If your billing process makes it hard or confusing to enter time and costs, and doesn’t intelligently pre-empt mistakes, costly errors will always creep in. For example, costs can get logged to the wrong project or billable work can be omitted from the system and therefore overlooked at billing time.

If the client is surprised by an item in an invoice, no matter how minor the apparent discrepancy happens to be, it serves as a reason for them to delay payment.

If your quotes system is also inefficient and error-prone, it can only bode ill for the invoicing that stems later from it. Items should be entered once and accumulated during the quotation and project delivery stages until the point that billing is reached, at which time creating an accurate invoice incorporating all chargeable items should be a simple process.

Invoicing can be hazardous. Are there many other activities in your company’s entire list of processes that could deliver such a catastrophic effect on cash flow if you get it wrong? Luckily, invoicing is also one of those processes that technology can deliver huge benefits to when you get it right.

Late billing has multiple negative effects. The first is that the clock for debt collecting can’t start ticking until the invoice is served, so the later you bill the later you get paid.

Secondly, clients have selective memories. If you bill late, other priorities emerge for them. Their perception of the value of work you did for them diminishes week by week. Statistics show that the later the invoice is sent, the greater the likelihood of it not being paid at all. Even small delays can have a big impact. Large companies pay on fixed cycles, so if you miss one by even a day you may have to wait a month.

Many companies have a divisive team perception problem yet don’t realise it. Invoicing can be seen as the ‘accounts department’s problem’. ‘Something that the finance people sort out. It’s their job’. This is a common condition. But it leads to friction, delays, mistakes, client frustrations and poor decisions by team members.

Surprisingly, these problems might seem hard to solve quickly, but they can be hugely helped almost overnight by simply introducing a system that reveals the commercial implications of each decision to the team. It’s one of the big payoffs of a good system.

If your system doesn’t make it easy for the team to see where each job is at, you can hardly blame them for not seeing the big picture either. Only live visibility can solve this.

Finance and non-finance people have different goals, pressures and even vocabularies. In the absence of a coherent system to pull everything together, terminology can be a major communication issue.

If your company doesn’t have smooth integration between project, billing and your accounts system you are creating unnecessary problems – duplicated effort, potential for errors, delays, synchronisation issues between project and financials, inconsistent reporting, and risk. 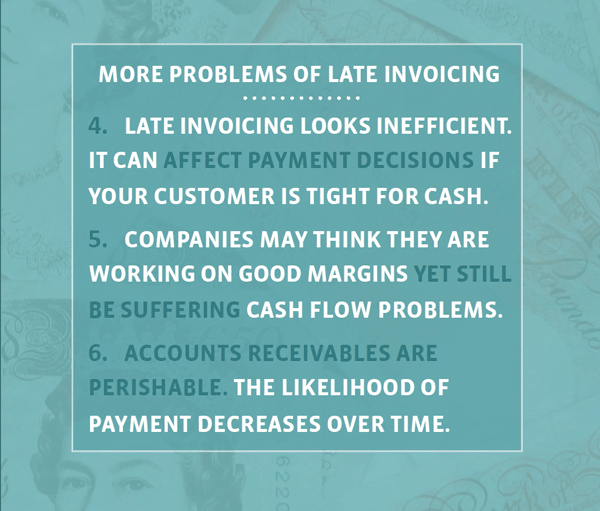 So, those are the issues. Let’s turn to a solution...

A good billing system needs to maximise the opportunity that billing presents, whilst making it a quick and easy process so users don’t try to put it off.

For your billing system to be effective, it’s essential it makes the raising of a invoice just another simple step in the lifecycle of the project. The triggers for raising the invoice need to be flexible to adapt to the nature of the work you’re performing. In Synergist they include:

Synergist can prompt you to raise invoices via email alerts or by a regular scheduled report of all projects needing billing for which you’re responsible.

How does it work? 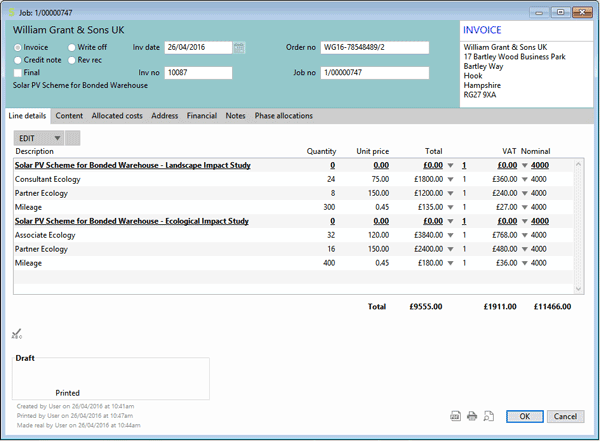 The content for an invoice typically falls into two areas:

1. Project-specific content that would normally be added by the person running the project.

This is the wording and financial values and Synergist prompts you to reuse information previously entered including:

In addition Synergist will prompt you with the correct currency to use, as well as the invoicing address and contact details to help ensure accuracy whilst making the process as easy as possible.

This information is added automatically by Synergist as determined by the configuration of the system, but is usually checked by an accounts person as part of the process of converting the draft invoices (created by the projects staff in 1. above) into approved invoices ready for sending. This split of the invoice creation process ensures there is no hold-up due to the project person not knowing which VAT rate or Nominal Code to use, whilst still ensuring accuracy of the invoices sent out.

What format of invoices can I send?

Synergist has a powerful layout tool that creates beautiful branded invoices that enhance customers perception of your business.

Invoices can then be sent to the customer in these ways:

3. Integrating with your accounts system

Creating timely, accurate invoices that maximise the revenue opportunity that billing represents is only part of the role of a great billing system. In addition Synergist will post the details of invoicies sent into your chosen accounts system accurately and with minimal work. The accounts system experts at Synergist have created interfaces to over 15 leading accounts packages to electronically post details of all invoices into your accounts system whether it’s in your office or in the cloud.

How does it work?

With which accounts packages does Synergist Integrate?
The list includes:

What's the effect on project-based businesses when they use Synergist’s invoicing process? Here are the three biggest invoicing-related effects that our users tell us about.

Business have any number of motivations for getting a new system, but improving profitability is usually high on the list. Typically such companies see their teams working hard every month but there is little to show for it. This clearly makes it hard for the business to grow.

One such company was 54-strong environmental consultancy ECUS. Sara Blannin, their Finance Director told us:

“Profitability was quite elusive. Everyone was working hard, but profits were hard to materialise.

Migrating to Synergist was one of the key areas of focus for me when I joined.”

Not everybody realises that in order to improve invoicing you have to improve the processes that capture the elements that end up on the invoices. Once at that stage, the actual invoicing is the easy bit. Sara said:

“The system has improved our processes.

This has been very useful in itself by improving efficiencies and avoiding errors.”

This has a big knock-on effect for the invoicing itself:

“The time taken to complete our invoicing has greatly improved,

not to mention reducing the time spent validating the data.”

Solving the profitability problem was key.

“Now, our Exec team can go to the Board meetings every month and say ‘We’re getting it right!’”

Cash flow is also usually high on most companies’ wish-lists. One Synergist user told us that one of their goals was to achieve:

“The drafting of invoices is now quickly produced by the project managers.”

“Invoicing is a lot easier now, such as pulling together all the time that has gone into the projects,

doing the calculations, creating the drafts and so on. It’s a great deal faster.”

Late billing was a particular concern of another company that now uses Synergist. Rebecca Frain, Managing Director of Electrical Safety UK, a small consultancy, told us of their previous methods of producing invoices. They held the company back.

“Billing was often late. When part of a project was completed it took time and effort to pull together all the costs and times and check for accuracy."

"There was very often a delay of two or three weeks before the invoice was sent out, which of course hurt cash flow.”

“Before, cash flow could be horrendous. After only one month of using Synergist this has been greatly helped.”

“The 2-3 week delay in invoicing has disappeared. It’s so much easier to get the data so we can bill it.”

“Supplier invoices are all fully tracked now so all costs are allocated properly. There’s far less risk of something slipping through the cracks.”

How much time do the people in your company waste trying to find information every week? Nobody tracks it, but that doesn’t mean it’s not significant. Getting an integrated system with easy access to live and historical data can be an eye-opener.

Webb Yates Engineers is a 30-person structural and civil design practice with offices in London and Birmingham. Andy Yates is a Director there.

“We had a previous system which had been designed for architects and engineers but it had severe limitations.

"Invoicing was handled separately. It didn’t link to our Sage accounting.”

After Synergist was installed, Andy told us:

to find the one that has a bearing on it. Everything’s in one place.”

“It’s very useful to be able to immediately see things like: Invoice analysis.

"Running that report just before the month end is really useful.”

Please note that you can download the PDF of this white paper.