Who do people trust today? New survey results are revealing.

57% of informed people in the UK trust institutions. But only 40% of the mass population do.

Some definitions: ‘informed public’ is defined as college-educated 25-64 year olds in the top 25% of household income who report significant media consumption and engagement in business news. This category accounts for 15% of the population. The remaining 85% are labelled the ‘Mass Population’. ‘Institutions’ include Business, Media and Government. 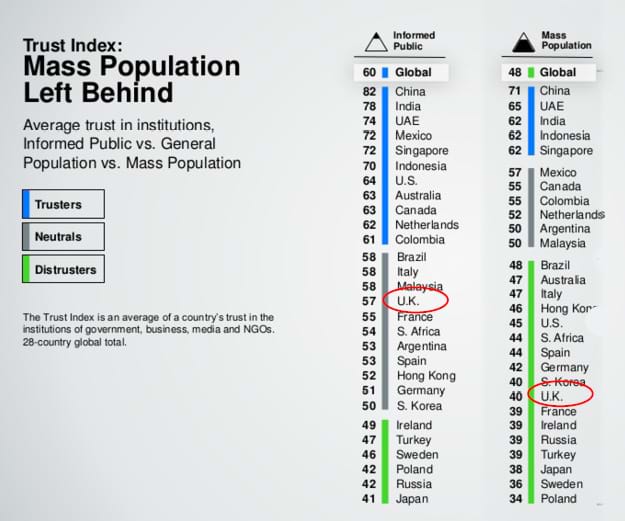 General levels of trust are rising, but the gap between informed and mass populations is also rising.

This has profound implications for agencies and consultancies in the branding, PR, communications and marketing sectors. Put simply, the level of institutional distrust by the masses is substantial, so you’d better know if your audience is informed or not before trying to make too many assumptions as to their instincts.

The informed public’s trust in institutions surged from 46% to 57% in the last year in the UK. The mass populations trust grew much more slowly.

This growing gap is also a global trend:

And the UK’s gap is bigger than most country’s: 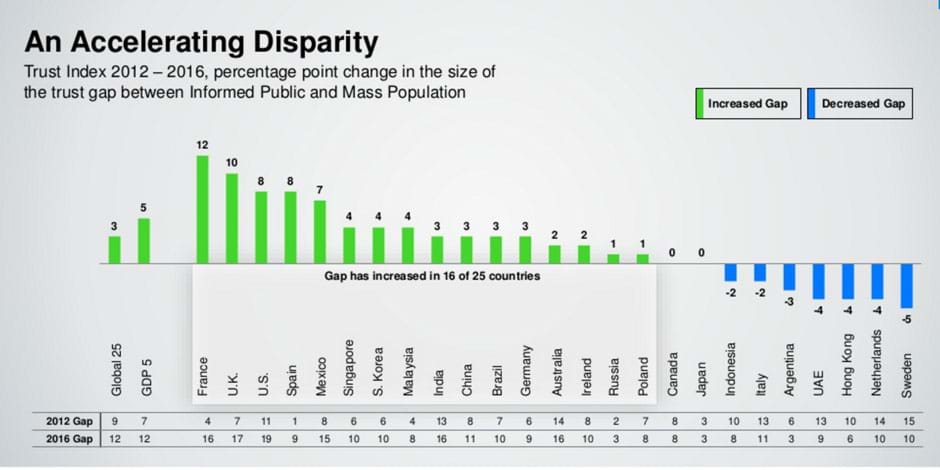 The UK’s informed population is optimistic about the next five years. Not so for the UK’s mass population:

75% of people are influenced by what their peers say. Peers are more influential than company CEOs:

In particular, peers influence the so-called Moment of Truth. 37% of people say peers help them overcome purchasing concerns, 44% say they help them make decisions, and 45% say they warn them about the risks.

Trust in Technology and Food sectors lead the way. But trust in car brands is sinking fast:

Some other statistics from the survey: